WILL THE NEXT SBC PRESIDENT CONDEMN OR CONDONE THE REVOICE CONFERENCE AND “LGBT+ CHRISTIANITY”?

The Revoice Conference, which will be held in St Louis on July 26-28, has recently made the news and caught the attention of believers around the nation. Conservative Media has also picked up on the Revoice “LGBT+ Queer Christian” controversy along with the “Social Justice” mantra of some in SBC leadership. Many have detected the threat these distortions present to the Gospel and the Church, yet few Evangelical leaders have stepped up to condemn the SBC’s liberal theology or to answer for their connections to it.

Who in Leadership Will Take a Biblical Stand In This Crisis Threatening To Normalize “Queer Christianity” in the Church?

Dr. Albert Mohler—whose Southern Baptist Theological Seminary graduate and faculty member, Nate Collins, is the founder and president of Revoice—has been silent, except to tweet out:

. . . an article by Owen Strachan that offers nothing but ambiguity on the controversial language and the theme of Revoice—“Promoting Flourishing of LGBT+ in Historic Christian Tradition.”

Dr. Russell Moore—whose ERLC Fellows and Associates actively promote Revoice, and whose hired consulting contractor, Arrowhead Advising founder, Branden Polk, is a Speaker at Revoice.  Polk reveals on the company’s social media that they are huge fans of a RuPaul Drag Race / Drag Queen judge. A favorite spokesperson for Moore and the ERLC is Sam Allbery, the same-sex attracted Anglican priest who founded Living Out since his introduction to the “conversation” at Dr. Moore’s 2014 ERLC Conference on Homosexuality and the Future of Marriage. Living Out was the first mainstream SBC affiliate to promote Revoice on social media:

“Have you checked out our website recently? (http://www.revoice.us) Even more workshops and speakers have just been added–and more still to come! We’re so grateful for our stellar team of speakers & presenters who are giving their time to be part of #Revoice18! We can’t wait!”

Amidst the controversy, Dr. Moore has remained speechless. In the cynical words of Pixar Monsters Inc’s “Roz the Snail,” Moore’s “stunned silence is very reassuring.”

It should noted that the primary source of the new language in the circles in which Dr. Mohler and Dr. Moore travel (The Gospel Coalition) is a White Paper drafted in 2010 by Regent University Psychology Professor, Mark Yarhouse, whose work includes an ongoing partnership with the gay affirming American Psychological Association, doing research with “gay and Christian psychologists to find common ground” for counseling gay persons who experience conflict between their sexual identity and their faith identity. The goal being to reconcile the two and to discourage repentance for homosexuality on the basis of Dr. Yarhouse’s presumption of sexual orientation. The work of Mark Yarhouse has provided the framework for discussion of a “Christian Sexual Ethic” centered around the now familiar language of “gay celibate Christianity.” “Sexual Minority” is the favored term since it provides both activist and victim status for LGBT+ persons in the Church.

So who will provide Biblical leadership to the Church on the issue of “LGBT+ Christianity”?

Let us consider the two candidates for election as SBC President in 2018 — J. D. Greear and Ken Hemphill.

Greear Promotes Yarhouse, Creator of the Template for “LGBT+ Christianity”

In 2012, Greear spoke at “The Nines Conference” which is an online stream held annually that includes such LGBT luminaries as Nadia Bolz Webber, the self -proclaimed “tattooed cussing lesbian priestess” of The House for All Sinners and Saints in Denver CO. 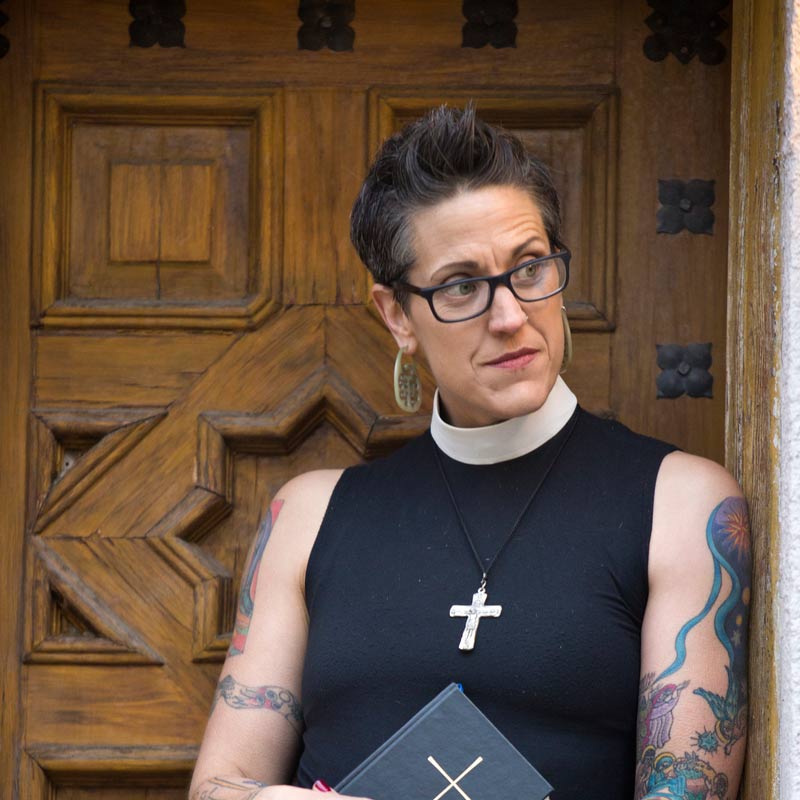 The title of 2012 Nines Conference was “Approaching Homosexuality With Grace.

APPROACHING HOMOSEXUALITY WITH GRACE
Created by The Nines Conference@ 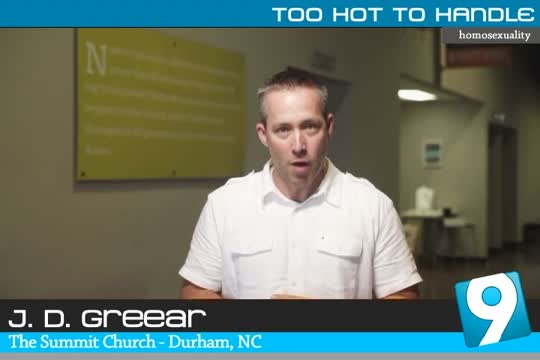 “In this 11 minute session from Leadership Network’s 2012 The Nines Conference, J.D. Greear, Senior Pastor at The Summit Church in Durham, North Carolina, delivers a thoughtful and gracious message about the way the church should approach the issue of homosexuality.

“In this 11 minute session from Leadership Network’s 2012 The Nines Conference, J.D. Greear, Senior Pastor at The Summit Church in Durham, North Carolina, delivers a thoughtful and gracious message about the way the church should approach the issue of homosexuality. We often get sidetracked from the real issue in a number of different ways, but constantly returning to the cross of Christ will fix our perspective on this issue.

“Truth without grace is fundamentalism. Grace without truth is just sentimentality. There is a way to speak the truth with grace so that we can disagree with people and let them know we love them. Think about how this dynamic affects the way we approach homosexuality.

“Have you seen your church fall into the trap of emphasizing truth without grace or grace without truth? How can your church embrace both of these so that you offer to the gay community the kind of love that Jesus commands?

“J.D. said that the test of our faithfulness to Jesus comes at our courage over these kinds of issues. What does he mean by that? Do you agree? How do you stand for truth on this issue of homosexuality?

“Do you have opportunity to extend friendship to gay people? How can you enter that relationship in a way that shows Christ’s love and doesn’t make that person feel like they are your project to fix?

“Don’t pander to gay people and try to tell them what you think they want to hear, and don’t be judgmental and try to make them hurt. Every one of us is in great need of God’s grace, so our emphasis should always be the gospel.  Speak the truth in love.

“J.D. mentioned several resources that have helped him learn and think about our culture’s reaction to homosexuality and the Bible’s response.

The Meaning of Marriage by Timothy and Kathy Keller
Politics According to the Bible by Wayne Grudem
Mark Yarhouse has written several books on this issue. All of them can be found at the website for his Institute for the Study of Sexual Identity.”

On Greear’s Blog, he and his staffers continue their endorsements of Yarhouse’s resources for people struggling with Same Sex desires and for youth and parents of youth with Same-Sex Attraction. One example is point 8 in Greear’s 10 Theses About Christianity and Homosexuality:

“A lot of harm has been done by Christian leaders who speak from ignorance, saying things like, “All homosexuals have been abused.” This sort of thing brings shame on our testimony. Again, Mark Yarhouse has a lot of helpful resources here. We should also recognize that sexual struggles are not limited to men—women struggle with homosexuality and pornography.”

Guest Blogger, Brad Hambrick who is Pastor of Counseling at Greear’s Summit Church, offers resources and endorsements of Dr. Yarhouse:

“Another audience would be parents of a child who has come out as gay. Homosexuality and the Christian: A Guide for Parents, Pastors, and Friends by Mark Yarhouse is an excellent resource for parents.”

Marital Sex
A Celebration of Sex by Doug Rosenau
Intimate Issues by Linda Dillow and Lorraine Pintus
Sexuality
Do Ask, Do Tell, Let’s Talk by Brad Hambrick
Understanding Sexual Identity by Mark Yarhouse
Homosexuality and the Christian: A Guide for Parents, Pastors, and Friends by Mark Yarhouse

A Look at Ken Hemphill On Homosexuality

Dr. Ken Hemphill has certainly not provided the depth of searchable material that Dr. J. D. Greear has on the topic of homosexuality. He does not appear to have been invited to speak at any of Russell Moore’s conferences on homosexuality and marriage nor has he provided any endorsements that we can locate for Dr. Mark Yarhouse’s materials for those desiring help with homosexuality or for parents and youth with same sex attraction in the church. What Dr Hemphill did provide is his response in 2001 when revisions to the Baptist Faith and Message brought national media attention to the Seminaries involved in the unthinkable requirement that Baptists (including those teaching at our seminaries) “must sign a statement affirming the Baptist Faith and Message” and that “all Baptists must oppose all forms of sexual immorality including homosexuality.”

The 2000 Orlando SBC convention changes also included affirmation that the office of pastor is limited to men.” Given the fast track toward “more women in ministry that the #MeToo movements recent run through the SBC camp, that point seems all the more relevant. The Paige Patterson “#Metoo pile on/blood-letting” led into the secular press by people from within the SBC stands in sharp contrast to Dr. Hemphill’s simple and straightforward responses to the secular media in 2001.

“Southwestern President Ken Hemphill said limiting employment to faculty who are willing to sign the convention’s Baptist Faith and Message statement as revised in June 2000 will ultimately benefit the seminary and Southern Baptists, the nation’s largest Protestant denomination.

“It’s important that an institution run its business day to day by its bylaws,” Hemphill said. “Our accreditation agency requires that, our integrity requires that.”

As revised at the 2002 annual convention in Orlando, Fla., the statement declares, among other things, that Baptists “must oppose all forms of sexual immorality, including homosexuality,” and that the “office of pastor is limited to men as qualified by Scripture.”

In 1998, the statement was revised to add the phrase “A wife is to submit herself graciously to the servant leadership of her husband even as the church willingly submits itself to the headship of Christ.” Quotes from 2001 Ken Hemphill.

In just a few days the SBC will elect one of these men to lead the Convention at a critical time in Baptist life and the life of our nation. Those of us over 40 who recall many other struggles within and from without the SBC mostly agree that this is a pivotal time and in many ways, an Esther calling moment “for such a time as this.” For Biblically Conservative men and women in the Church, and in particular the SBC, the time has arrived to take a stand for the Savior whose politics are not partisan and whose Word on Homosexuality, Marriage and Gender roles, in the home and in the Church, is neither fluid, nor negotiable, nor optional for those who bear his Holy Name.

19 Nevertheless the solid foundation of God stands, having this seal: “The Lord knows those who are His,” and, “Let everyone who names the name of Christ depart from iniquity.”
20 But in a great house there are not only vessels of gold and silver, but also of wood and clay, some for honor and some for dishonor.
21 Therefore if anyone cleanses himself from the latter, he will be a vessel for honor, sanctified and useful for the Master, prepared for every good work.

“If I profess, with the loudest voice and the clearest exposition, every portion of the truth of God except precisely that little point which the world and the devil are at that moment attacking, I am not confessing Christ, however boldly I may be professing Christianity. Where the battle rages the loyalty of the soldier is proved; and to be steady on all the battle-field besides is mere flight and disgrace to him if he flinches at that one point.” (Luther)