In light of the controversial  Revoice Conference in July 2018 and the trouble sparked by Tim Keller’s speaking at the Living Out Conference while it promoted Revoice , one might expect those involved in the controversy to lay low and avoid further attention . This is not the case. During the Keller conference for LGBTQI+ Christians an “ Inclusion Audit for Churches” was planned and presented. That audit was made public on August 15 tweet seen below.

We’ve recently developed this LO Church Audit to help church families work out whether they are biblically inclusive. How will your church do? http://www.livingout.org/resources/the-living-out-church-audit … #BiblicalInclusion 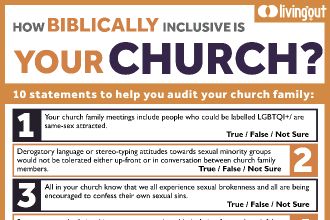 This litmus test is touted to be a self-imposed audit for determining where our churches stand on Keller/ Living Outs touted version of “Biblical Inclusion”. From the website it reads –

How biblically inclusive is your Church?

“At our Identity in Christ conference with Tim & Kathy Keller in June 2018 we launched our Living Out Church Audit – a tool to help church leadership teams answer this key question: how biblically inclusive is your church? Unsurprisingly our focus is on those who might identify as LGBTQ+/ same-sex attracted: Jesus included all in a counter-cultural way and we hope this audit will help our churches follow his lead.”

Complete with Video http://www.livingout.org/resources/the-living-out-church-audit    Living Out and The Gospel Coalition (of Tim Keller) spokesperson Ed Shaw / same sex attracted priest , informs  you that your church should immediately adopt this Biblically baseless examination of 10  statements of inclusion as the starting point for testing your church culture regarding LGBTQI+. The implications and objections to each are listed following /below under the heading “PROBLEM”.

A stateside effort very similar to Living Out and Tim Keller’s Church Audit can be found at Church Clarity https://www.churchclarity.org/advocates  . This “test” survey is administered to the church by activist organization advised by two activist no strangers to controversy at Wheaton College. One is Julie Rodgers who is a personal Friend to Revoice founder Nate Collins and others in the Revoice camp. Julie   jumped from the Celibate side B to the fully affirming side A in 2015 after the Obergefell decision making gay marriage legal. Julie is also a good friend and works /appears in conferences with Mark Yarhouse- whose work heavily influences- The Gospel Coalition, Revoice, Living Out, Nate Collins, Sam Allberry , Tim Keller , J D Greear , Russell Moore, Tim Keller , and the list goes on and on.

The Christian church, if it institutionally embraces , LGBTQI+ Christianity then its days are numbered. It will be weighed in the balances and found wanting as will these leaders who brought us here.

IS HERITAGE FOUNDATION BEING REVOICED? HOW THE “LGBT CHRISTIANITY” OF REVOICE COULD BRING DOWN CONSERVATIVE DENOMINATIONS AND ORGANIZATIONS ACROSS THE NATION. 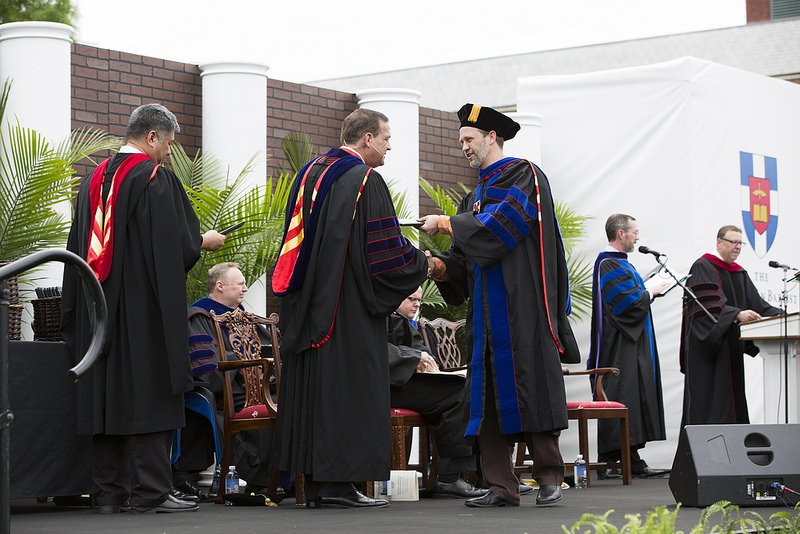 The social justice mantras of some modern day evangelical leadership in the Southern Baptist  and Presbyterian Church of America  are pounding the church with fears over the “Stain of Racism” while some ignore the stain of the current “LGBT+ Christian “ movement behind Revoice . So from where was this movement incubated and launched but from our own conservative institutions like Southern Baptist Theological Seminary (STBS) and Covenant Seminary of the PCA.  Few conservative Christians would have dared to believe just a decade ago that the Summer of 2018 would prove to reveal the potential demise of two major denominations in America until news of the July Revoice Conference in St Louis came into the collective evangelical awareness. The much-reported St Louis Revoice conference was billed as “Promoting LGBT+ flourishing in historic Christian tradition” came in like a stealth bomber to drop its payload of “Queer Christianity “on an unsuspecting evangelical church. The conference itself was even worse than may expected it to be. For those who followed this train wreck from our reports in early May, the glaring omissions and anemic reporting from entities like The Gospel Coalition, The Council for Biblical Manhood and Womanhood , Ethics and Religious Liberties Commission came close to satire .Denny Burk of CBMW had possession and published http://www.dennyburk.com/what-about-the-revoice-conference/  a new, less controversial workshop title formerly called “Possibility Models in Queer Theory:an Adventure “ at least 24 hours in advance of the Revoice website update with the new title. Burks social media  has confirmed back room conversations with Revoice organizers.

Albert Mohler had commented and written several times after Burks May 30th article. But it took until his August 2nd report https://albertmohler.com/2018/08/02/torn-two-cultures-revoice-lgbt-identity-biblical-christianity/  for Dr. Mohler to finally use the name of the Revoice founder Nates Collins for the first time after  he continually avoided his disciple’s name altogether . Although the most recent article does mention Collins name 9 times and quotes from Collins book ”All But Invisible…” several times, Dr Albert Mohler STILL fails to mention the fact that Collins spent over 14 ½ years as Mohlers seminary SBTS . Is he intentionally not wanting to acknowledge the fact? Collins carries two degrees, taught both on campus and online , and traveled as a scholar representing SBTS. Collins incorporated the non-profit and began planning the Revoice  Conference while still an online instructor of New Testament  and serving as a Garrett Fellow mentoring students and grading papers at SBTS. He wrote his book from which Mohler quotes while at SBTS and had served for 5 previous years on the board of LOVEboldly which is a far more openly LGBT+ Christian  affirming organization working in tandem with members of radical faith activism like the Human Rights Campaign  and Mathew Vines Reformation Project. Why are these disturbing facts something Albert Mohler is still skirting or hoping to live in denial about rather than simply denounce them? Has Revoice simply hit too close to home for honesty ?

This writer broke this story on May 10th 2018 and that research has been used by dozens of writers and publications most often without citing or linking the source. Though this is an integrity issue for those who were willing to make use of research they had not invested in- let it be said with Paul “nevertheless the (word) went forth “exposing the false gospel in this gay Christian movement for evangelicals. Make no mistake the Revoice event is gone but the much larger movement that birthed it is ongoing and entangled deep within the conservative Christian camps. Major players in trusted entities besides SBTS and Covenant seminaries were connected behind the scenes.

As the storm was building against Revoice radical new language and mission in the church ,by late June Christian Tabloid publication Christianity Today was attempting to mainstream the founder of Revoice Nate Collins by publishing https://www.christianitytoday.com/ct/2018/june-web-only/andrew-walker-transgender-debate-ryan-anderson-harry-sally.html  an article on “What Transgender People Need from the Church” in which Collins reviews /promotes the book of Heritage Fellow Ryan T. Anderson and SBCs ERLC staffer, Russell Moore clone Andrew Walker as “go to” sources for this ”compelling “ issue for the church. Christianity Today later sent out its heavy hitter , editor Mark Galli  to cover the Revoice controversy in an interview https://www.christianitytoday.com/ct/2018/july-web-only/revoices-founder-answers-lgbt-conferences-critics.html  with Collins on the day before the conference began in July again in an attempt of  mainstreaming the conference .

Curious to find the depth of a Heritage Foundation William E. Simon Senior Fellow Ryan Anderson’s https://www.heritage.org/staff/ryan-anderson ties to Revoice founder Nate Collins one need look no further than Collins biographical information at SBTS. https://independent.academia.edu/NateCollins3/CurriculumVitae  According to Collins- at the same time Revoice was being organized in St Louis and incubated at SBTS and Covenant Seminaries Ryan T. Anderson and Nate Collins , along with Revoice speaker Laurie Krieg and Revoice mentor and luminary Preston Sprinkle , were presenting together in the Q Ideas Forum of progressive evangelical and Tim Keller “Good Faith “ pal Gabe Lyons. According to Collins the presentation was a panel discussion hosted by Sprinkle and covered “LGBT issues “.

How much influence is the radical LGBT+ Christianity Revoice message having on the Heritage Foundation, Public Discourse, Witherspoon Institute and other  publications and areas where Anderson is respected? Is Ryan Anderson mentor Robert George buying into Revoice message?  Given the exposure , which even disturbed the LGBT press,  http://www.washingtonblade.com/2016/02/15/rubio-creates-anti-lgbt-marriage-and-family-board/   of  the proximity of Anderson and others in Florida Campaigns to Paul Singer (billionaire /massive LGBT funder) these further mixed messages on LGBT and associations with Revoice founder in the same timeframe as the conference was being planned leaves lingering and  disturbing unanswered questions.

Revoice also had multiple ties to the Southern Baptist Ethics arm the ERLC  beyond those previously reported (ERLC Fellow Karen Swallow Prior endorsement and ERLC consultant on Christ Centered Parenting Conference ,among other projects , Revoice speaker Branden Polk.)  In his personal blog Revoice founder Collins urged supporters of LGBT causes in the faith community to financially support ERLC , Gay Christian Network , and Collins broader gay affirming ministry association LOVEboldly . Unsure at what point Collins was signaled by leadership of the ERLC that the once firmly conservative SBC entity was now supporting the message of LOVEboldly and Revoice – we still see the connection to Collins through ERLC underling Andrew Walker whose book (again ) Collins reviewed in Christianity Today and who came out with a soft shoe critique https://erlc.com/resource-library/articles/what-about-revoice  of Revoice in the place of his boss at ERLC Dr. Russell Moore just days before the conference  .

The ERLC’s Russell Moore and PCA champion Tim Keller have appeared in the same Q Ideas forum “The Gay Conversation”  http://qpodcast.org/  with many of the key Revoice speakers and the brain trust behind “Sexual Minority /LBGT+ Christianity Mark Yarhouse. These are the same broader conversations of which Revoice founder and Heritage Foundation Fellow Ryan T. Anderson took part in together. Oddly this conference is also archived and linked on a site entitled “gaychristians.org “.  http://www.gaychristians.org/  This site expresses support of “Gay Christianity “ in the very broadest of terms.

“Perhaps those references in the Bible have been misinterpreted and taken out of context. Besides, are we really supposed to literally take in everything the Bible says to heart? After all, the Bible was not actually written by God, but rather by his followers and their interpretation of his word. Of course there are varying degrees of acceptance amongst Christian groups. There are some that completely accept homosexuality while there are others that have placed idealized conditions upon it.”

What one must ask at this point is “why does the Gay Christian site that espouses the loose interpretation on the Bible described above- see the Q Idea podcast of “The Gay Conversation “ by Russell Moore, Tim Keller, Collins , Ryan Anderson, Yarhouse and more as a helpful resource for those promoting Gay Christianity?” How far is the Stain of Revoice soaking through the conservative Christian community? How many of our important institutions like Heritage Foundation , SBTS, Covenant , ERLC  have been marked with the deadly assumptions of LGBT+ Christianity ?

If we are prepared to allow for it’s continued advance – the Revoice message is heading to our teens in youth groups by targeting https://thirtypiecesofsilver.org/2018/07/07/beyond-revoice-part-1-recruiting-youth-pastors-targeting-your-teens/   our youth pastors . It is clear the stain has reached our young people in our own seminaries and the false social justice narrative of sexual minorities in the church and in ministry. Are our Washington D.C. Conservative think tanks also being Revoiced to reflect “Queer Christianity”? Has this radical message found sympathetic ears and minds in chosen young spokesperson like Ryan T Anderson? If so then Christian Conservative beware. The Revoice  leaven  has leavened the whole lump and it happened under the watchful eyes of some of our most trusted leadership. God forbid we sleep through this carefully engineered  quiet revolution .