How a wonderful Christian legacy was devoured through the corruption of a Georgia Republican Congressman -greed, the funding called Creative Placemaking and  fearful and apathetic Church leaders .

This story first ran in Summer of 2016 in Life Site News. It is more than an objective set of observations but a deeply personal first hand experience . This writer watched the lifetime of ministry and the joys of thousands in a small prayer garden filled with Scripture and Southern folk art work -turned into a platform for promoting the NPS and millionaire activist LGBTQ agenda. A decade of my own hard work evaporated and gave way to the anguish of watching the God honoring life and work of Rev Howard Finster trampled as his “Garden of Paradise” turned into a living hades on earth. Finster’s boast was “I never met a person I didn’t love “. Following in his footsteps to preserve a small testimony to Jesus in the hostile world of secular art was in many ways a fools errand -but God loves those willing to be considered fools for Christ sake. Seven years later this is not yet a story of redemption but of endurance  and we have set our faces to endure and allow Gods hand to work His will for His glory and namesake. 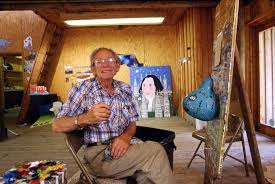 July 22, 2016 (LifeSiteNews) – Americans love our history, historic sites and natural wonders, and since the time of Teddy Roosevelt have entrusted our government with their care. The National Parks Service (NPS) may be one of THE most trusted of all federal agencies. However, this trust may now be misplaced due to an activist culture within all federal agencies. In June, President Obama made good on his promise to name Stonewall Inn, the Greenwich Village (then Mafia owned) gay bar considered ground zero for the modern LGBT rights movement, as the first National Monument to LGBT rights. Shocking as this may seem, the National Park Service has been quietly transformed from within by activist appointees and a pro-LGBT hiring policy drafted for federal agencies.

In a preservation effort in northwest Georgia, our project was caught up in this vortex of LGBT “History” and the funding that is following it. Our story begins in 2010 at about the same time that a public/private partnership between the NPS and the Gill Foundation was created.

For over a decade a small group of volunteers had been working to find a pathway to preserve the life’s work of Southern folk artist Rev. Howard Finster. His almost 50,000 pieces of artwork adorn the walls of museums, corporate offices, galleries and private collections around the world. Yet Finster’s greatest work was his art environment known as Paradise Gardens. Throughout the ‘70s, ‘80s and ‘90s, artist-musicians and Finster’s growing fan base made pilgrimages to Paradise, an eclectic collection of found objects, signage and scripture mixed together to create a folk art Garden of Eden for prayer and meditation. Finster’s unique use of the medium of art to relate his overtly gospel and, at times, apocalyptic message attracted one of the most fervent and diverse fan bases of any artist in history. The continuation of his message and spiritual inspiration was both the driving force behind the preservation effort and its greatest challenge in the world of art now often hostile toward it.

It was no small accomplishment when the National Park Service and the Georgia Trust for Historic Preservation began to show interest. We were approached after the NPS had featured its first somewhat similar art environment named Pasaquan and placed it on the National Registry. The similarities between the work of its creator, Eddie Owens Martin, and Finster begin and end with both heaving created works of art and placed them in outdoor environments. Rev. Finster, a Baptist minister, had been the pastor of rural churches in Georgia, had become a beloved figure for his lifelong motto “I have never met a person I did not love.” Pasaquans creator Martin was the son of a sharecropper who had run away from his south Georgia home to the streets of Greenwich Village in New York and become a male prostitute and drug addict until returning home to build his environment. Martin took his own life by a self-inflicted gunshot.

Unknown to us, the NPS had been interested in Martin’s work BECAUSE of his homosexual history and not in spite of it. The LGBT Heritage initiative (launched unofficially in 2010) also was the source of interest in Paradise Gardens as the NPS began actually searching for gay history to feature around the country. Unfortunately for Rev. Finster’s legacy, several famed homosexuals like artist Keith Haring had visited the Gardens or collaborated with Finster projects in the past. Apparently, this history is all the Georgia Trust for Historic Preservation and the State of Georgia Department of Natural Resources Historic Preservation division needed to qualify Rev. Finster’s Paradise for the NPS gay focus and the activist funding which would follow.

Our efforts with the NPS had culminated in partnering with the local U.S. Congressional offices and the County for an initial Federal grant from the Appalachian Regional Commission. This funding would enable the local county to buy into the project. During the closing months of intense efforts to gain the matching funds for the ARC grant, the possibility for funding from a new grant emphasis called Creative Place Making surfaced. The CPM initiative had recently become the focus of the National Endowment for the Arts “Our Town” funding that was sweeping the preservation arts and economic development community.

What is Creative Place Making? According to the ideology on which it is based – a Creative Class of people exist in our culture and their interest – welcome – and participation in urbanization, economic development , urban renewal and even historic preservation is a requisite for success. And who are these creative people? According to longtime guru of the Creative Class – Richard Florida – they are gay or lesbian, bohemians and musicians, or those who like to hang out where they find heavy concentrations of such creative people. Florida has created a litmus test for gauging the presence of these elements and named them appropriately — “the gay index — the tolerance index and the bohemian index.” Needless to say, the ideology is controversial but has created a flock of followers including the pro LGBT federal grant programs.

In 2012, once the local county buy-in had taken place, our Preservation Partnership began to go awry. Secretly (according to the Freedom of Information Act request later obtained), the Creative Place Making future was identified for Rev. Finsters. Paradise Gardens had inspired the county and the congressional office director to form their own partnership and, with the help of the state of Georgia preservation community, to seek and obtain a series of grants from some of the oldest and longtime supporters of abortion/Planned Parenthood and gay rights in the nation. This funding windfall came from Artplace America funded by such Foundations as Ford, Rockefeller, and Knight. Artplace is considered a “private sector sibling” of the NEA. Additional funding of almost a quarter million dollars came from The Educational Foundation of America, another longtime supporter of abortion and gay rights. EFA often follows the CPM of Artplace.

As one may imagine, the new funding immediately overshadowed the legacy of Rev. Finster and the goals of our dedicated volunteers. As a result, our stand against the use of Paradise Gardens as a platform for celebrating LGBT heritage and funding which actually dishonors his Christian legacy created a lack of place and space for us in our own project. Our front entrance/parking and reception property were literally walled out of Paradise, which is now literally shrouded in the art of Keith Haring and other well-known gay artists, and complaints to the NPS offices in Georgia were met with this response: “This is gay history and we are proud of it.”

Thomas Littleton is chairman of Paradise Gardens Park and Museum, which continues to work to celebrate the true legacy of Rev. Finster to artist, students and at museums, art festivals.