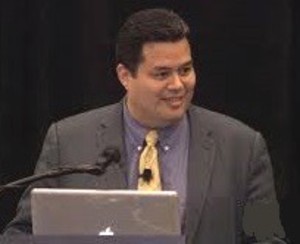 I have known Dr Robert Oscar Lopez for several years and we have worked together on projects , articles and several conferences. He has a powerful testimony of deliverance from homosexuality and from having been raised in a lesbian household in an  Ivy League ,achievement driven, family. Dr. Lopez is a writer, educator, thinker, speaks 8 languages and is Yale educated. He does not shy from the truth about his past or his conversion to faith in Jesus and has paid a price for standing up in secular academia for the Gospel . One such stand left him embattled and jobless in California. In the heat of this battle and aftermath Dr. Lopez was contacted and offered the chance to teach at SWBTS in Ft Worth by then President Paige Patterson who himself was destined to become the target of progressive forces in his own Southern Baptist Convention .

Once Paige Patterson was forced out of office at SWBTS in the Spring of 2018 Dr. Lopez and his closest friends all knew he was now in a perilous place with his employment. From all outside appearances it was the #MeToo movement and the secular press who “caught “Paige Patterson “covering up” a long history of abuse. But once the new administration for SWBTS came on line it was fairly clear that the power behind Patterson’s removal was Albert Mohler as his “team”, including Randy Stinson (who became SWBTS new Provost),  were moved into place to complete the Mohler machine take down and take over of the Ft Worth Seminary.

LIFE IN THE MOHLER CROSSHAIRS

The day after Thanksgiving 2019 Dr. Lopez finally received “official notice” of his termination from SWBTS. Supposedly he was “laid off” because curriculum changes eliminated his position when in fact Mohler’s people, including Stinson, had been targeting and intimidating Lopez for months. They called him into meeting after meeting with the Dean and the Provost – demanding he not do interviews or write on issues related to LGBTQ and his testimony without gaining permission from a new young staffer Colby Adams. who was also from the Mohler camp as Mohler’s Producer for his program”The Briefing” producer.

Lopez is a prolific writer and commentator on cultural issues and academia so such restrictions were too vague, open ended, not put in writing and restrictive for Lopez to discern, comply and follow. Adams inability  to respond in a timely manner cost Dr. Lopez opportunity to speak to such concerns in national publications. Yet this expectation by the new Mohler leadership at SWBTS came with threats that Lopez writings and opinions  “would force them to fire you” and “if you are going to write that you will have to do it from somewhere else”.

Mohler underling and SWBTS Provost  Randy Stinson personally slid resignation paperwork across his desk demanding Lopez resign. This was several months ago. Now that Dr. Lopez is going public, Stinson released a statement on the situation and why he and SWBTS insist Dr. Lopez was terminated. In the statement Stinson denies Dr Lopez recent statements on his termination and even counters his own documented position in the matter. Stinson’s SWBTS statement also descends into the level of personal attacks on Dr Lopez.

Here is Mohler’s SWBTS Provost Randy  Stinson’s “Official” Statement. Mark these words which will soon be sinking to the bottom of a VAST sea of truth.

Having followed this story from the time Paige Patterson was forced out of SWBTS to today, I can affirm that the issues involving Dr.Lopez at SWBTS, a Southern Baptist institution, have everything to do with Albert Mohler and the problems his own progressive movement in the denomination has created.

Here they are in no particular order